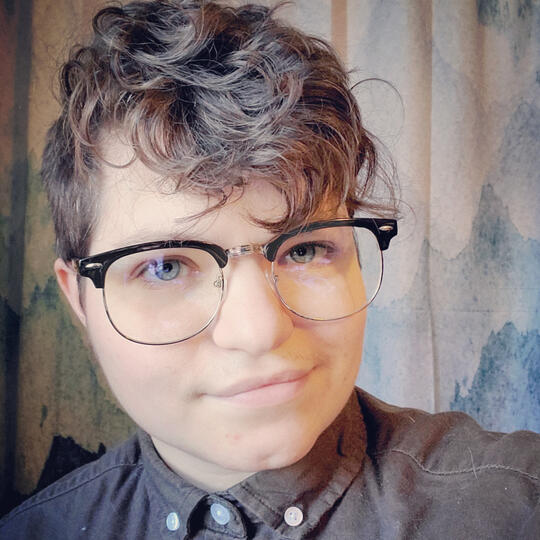 Smote currently holds a Masters in Library and Information Science from Syracuse University. Born and raised in Kent, Ohio, they attended Kent State University, graduating in 2015 with their Bachelor of Fine Arts in Printmaking and Bachelor of Arts in Visual Communication Design. During this period, Smote had been working at the Kent State University Library and the Student Multimedia Studio and discovered they absolutely loved the atmosphere, the challenges presented, and the library culture.

Smote currently is the Librarian at the LGBT Center of Raleigh Library, the Library Assistant at the Perry Health Sciences Library, and does pro-bono design work for the Michael "Mickey" Soroka Scholarship Foundation. They continue to create as well, teaching papermaking classes at NC State Crafts Center and the NC Museum of Art and taking on custom client commissions in addition to personal work.

One of Smote's main passions is tea! With over 200 different types of tea in their collection, it comes as no surprise that they used their extensive tea collection as a way to play with database structure and spreadsheet functionality. If you're interested in seeing their current collection, pop on over to their Tea Time Database to check out what's brewing!

Smote was born in Kent, Ohio in 1989. They received a Bachelor of Fine Arts in Printmaking, a Bachelor of Arts in Visual Communication Design, and a minor in Photo-Illustration from Kent State University in 2015. Over the summer of 2015 Smote was awarded a two week residency at Zygote press and stayed on after to help the shop as an intern and as a private tutor. Additionally, they were invited to and participated in the 2015 Boston Mills ArtFest. In 2015 they moved to New York and began attending Syracuse University where they worked on the creation of the 2016 Salt City Dozen juried portfolio and accompanying website, printed under Art Werger and Koichi Yamamoto with Lake Effect Editions, worked as a monitor in the print studio and fabrication lab, and assisted with teaching multiple printmaking courses.

Smote’s work has been shown in a number of galleries and exhibitions including Baton Rouge Gallery, Summit Artspace Gallery, the GAR Foundation, ASM International, and at Zygote Press. Their work has been published in The Hand Magazine, the artist collective, Ghostbook, and the charity artbook, COLORS Project and has been purchased by both private collectors and public institutions. They continue to teach both papermaking and printmaking as both a private and public instructor.

Science and technology have always had a profound impact on my life and continue to be the foundation of my artwork today. The systems and methodologies in my work have been drawn from my previous studies in biology, industrial and graphic design, and animation. I focus on the process of deconstructing both familiar and unfamiliar elements and distorting them into something new and unexpected. By employing non-traditional printing processes as well as the use of sculptural prints and installations I examine the relationship between the viewer and the work, creating an experience where two disparate elements come together as one.

My pieces do not always reference recognizable forms, but nevertheless do represent small segments of the world around us. I apply the use of representative elements in combination with abstraction to strike a balance between my intent and the viewer’s interpretation to elicit a visceral response to the subject, material, and display.

For my own work, I am creating things that function as both a reflection on my experiences and as a coping mechanism through which I have been able to manage intense emotional experiences. The artworks that I share invite the viewer to contemplate how their own experiences can relate to other’s experiences and, in some cases, might offer the viewer a sense of relief or closure. I am looking for my works to challenge the audience’s perceptions as well as become therapeutic to those who have lived through similar experiences.

Three 'chapter' book of Earth inspired by my home and my love of nature and created as a physical manifestation of anticipated nostalgia regarding my significant change of locale after nearly 26 years of living in the same area.

A book about sustainability. Trash and recyclables printed on found paper and repurposed ends of scrap wood flooring.

Screenprinted book on vellum. The book is designed to open continuously in a circle, neverending. Pages are printed front and back.

Skins uses light and shadow along with printed media to convey the fragility of human existance. The book itself feels incredibly delicate, the membranous handmade paper barely keeping the book together, the clear 'pages' precariously balanced with no support. The skin cells, from one direction slowly fade as they die. However, the paper is much stronger than it first appears and the plexiglas panels are robust. The light blows out the printed media but casts intense shadows upon the surface the book rests upon. Read the opposite direction dying cells return to life.

Part of the "OH•IO•WA" Spring 2015 print exchange between Kent State University and the University of Iowa. There were 22 partcipants total.

All 22 prints will be on display at the Elizabeth Catlett Print Gallery at the University of Iowa in May of 2015.

Oculi Interni is based on the imaging outlines of the back of the inside of the artist's eyeball, and colors pulled to inspire weather mapping for hurricanes and storms. Printed for the 2014 "Overlie" print exchange.

This is the third print in the series of relief monoprints made from mistakes, scraps, and cast aside pieces from a Makerbot Replicator2x 3D printer.

This is the second set of prints in the series of relief monoprints made from mistakes, scraps, and cast aside pieces from a Makerbot Replicator2x 3D printer. There are 6 unique prints in this set.

This is the third print in the series of relief monoprints made from mistakes, scraps, and cast aside pieces from a Makerbot Replicator2x 3D printer.

A series of ImageOn prints started during the Print the Midnight Sun workshop in Finland. Individual prints later combined into one larger image.

Primitus Aduro is the first in a series of four lithographic prints based around microscopic organic structures.

This small variegated edition was created from a single screen print of watercolors and watercolor pencil. The inspiration for these images comes from microscopic photographs of different chemical compounds and cellular structures. The darker yellow/brown overlay is a shimmering gold tone.

The piece is very personal but reads as abstracted to others since those outside of my family will not be aware of the significance this work has.

Aconitum is a print inspired by my childhood home and the wildflower garden my mother used to have. She was very proud of the monkshood (aconite) flowers that grew there. They were rare enough that she was even in the newspaper for their presence in the garden.

The shape of the piece directly relates to our plot of land with the blue representing our house and the lighter brown our driveway. Looking closely you can see the pathways through the garden and the plots where the flowers and trees mainly grew.

Flux is a variation on the BangBang prints, taking the two-dimensional form and through cutting and re-arranging the forms, creating a new piece. Flux is in response to the perceived view of the BangBang as lichen or some type of organic life form despite the fact that the original image is of a bullet hole in glass.

Flux seeks to juxtapose this life and death imagery, settling into a middle-ground as the sculptural form takes on a blossoming flower-like aesthetic but still maintains the sharp edges and the feeling of chaos and destruction.

A coping mechanism and a prompt for discourse on the skin picking disorder, Dermatillomania.

Part of the 2014 Summer Blossom Arts Printmaking workshop: Printmaking in an Expanded Field. The project idea is based on the Icarus mythos and dabbles with the ideology of the albatross from the Rhyme of the Ancient Mariner. A major component of this installation was the documentation of the processes used. Over 930 feathers were printed for the Myths, Tales, and Illusions: Prinstallation exhibition.

Wassily Columns was inspired by the plethora of prints during the Fall 2013 IFPDA print week in New York City and a stunning exhibition of Wassily Kandinsky's works at Neue Galerie. It is also an experiment with printing into plaster, a process that is both both intriguing and rewarding.

To divide or mark something in such a way as to resemble a net or network. This sculpture is part of ASM's permanent collection.